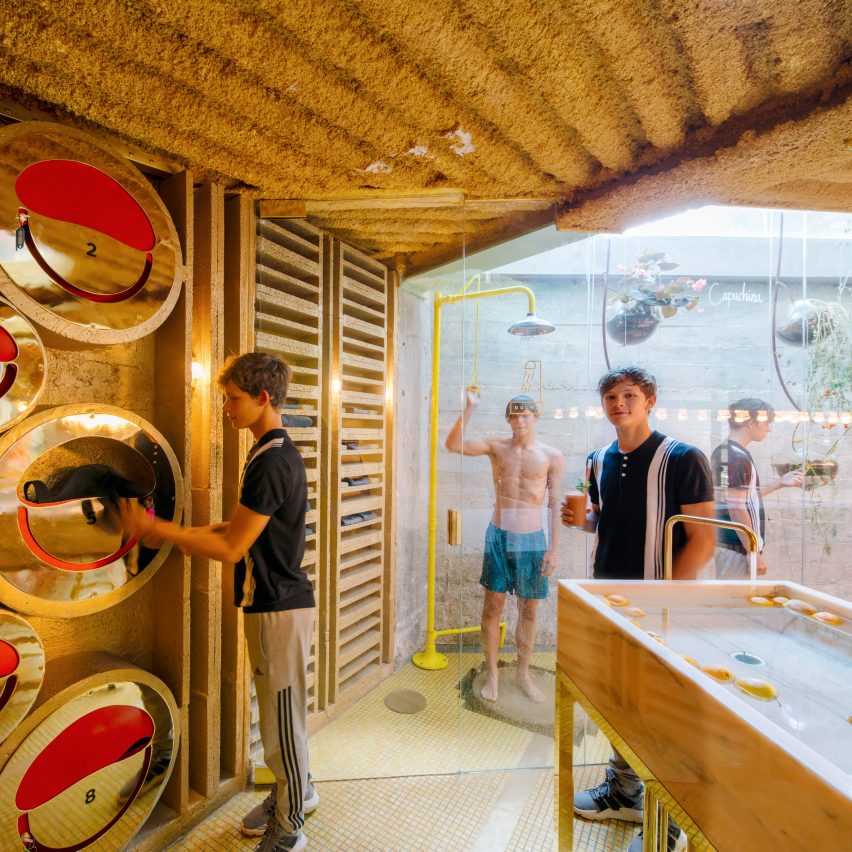 More than food and drink is offered inside this healthy Vegetable garden Cafè Madrid, where architecture practice Andrés Jaque/Office for Political Innovation has included a host of quirky facilities. 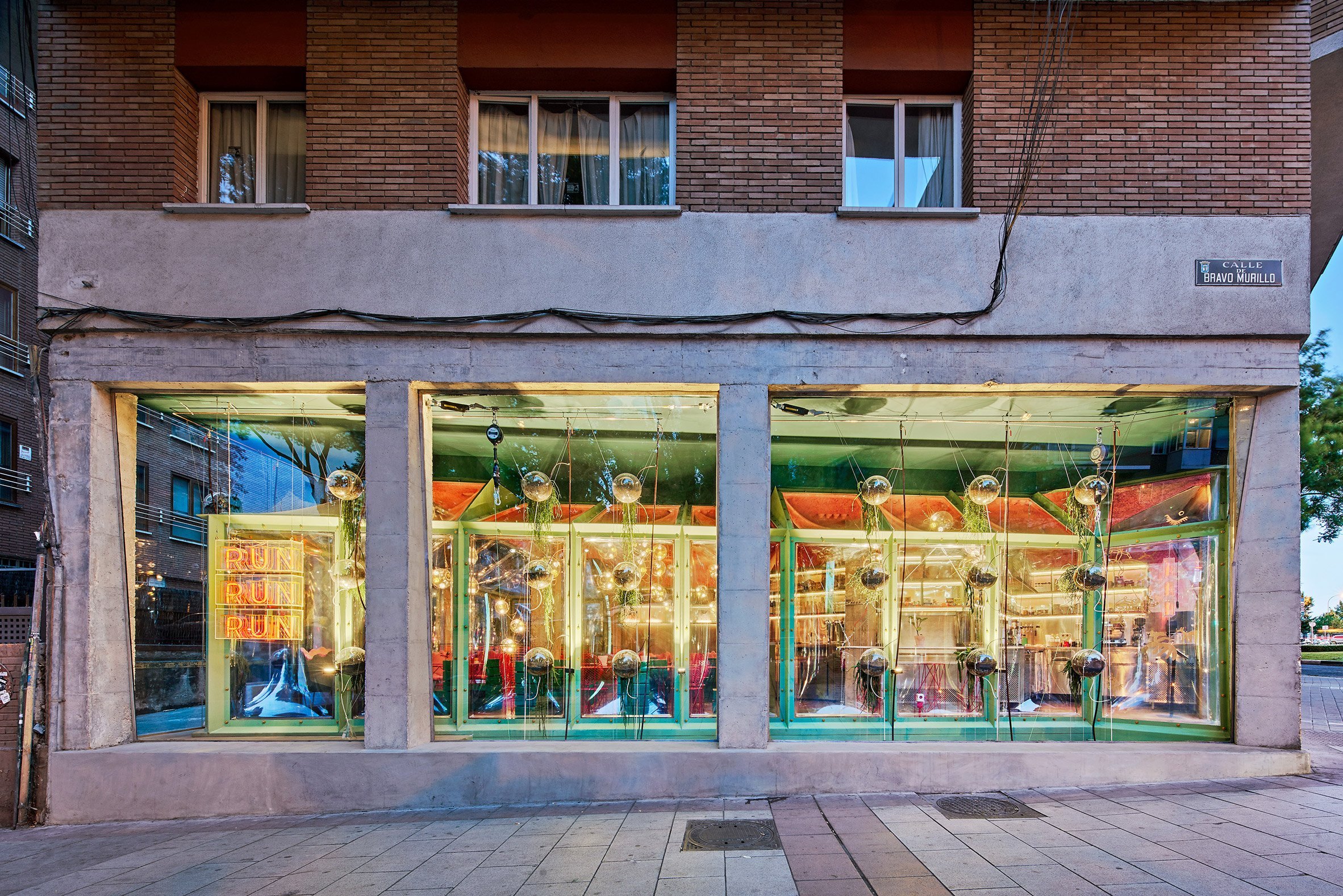 The two-floor cafe, which also hosts a running club for locals, includes showers and lockers, as well as a vegetable garden that grows ingredients required for the dishes on the menu.

Locally based Andrés Jaque/Office for Political Innovation hopes this clashing mix of facilities will encourage people to “use the city differently”.

“Its an infrastructure that turns the city into a playground and a place for people to transform their bodies,” said the practice.

“It supports emancipation from domestic spaces and provides opportunities for interhuman gathering through activities that usually promote individuality.”

A social security office previously occupied the site of Run Run Run, but its fit-out was completely stripped back to leave behind just a handful of concrete columns.

The practice worked around these columns to erect an internal greenhouse-like structure, composed of mint-green steel beams and sheets of plastic.

Spherical glass orbs planted with soil and vegetables have been suspended in the narrow void between the greenhouse and the facade of the building, allowing passerby on the street to get an up-close glimpse of the produce being grown. 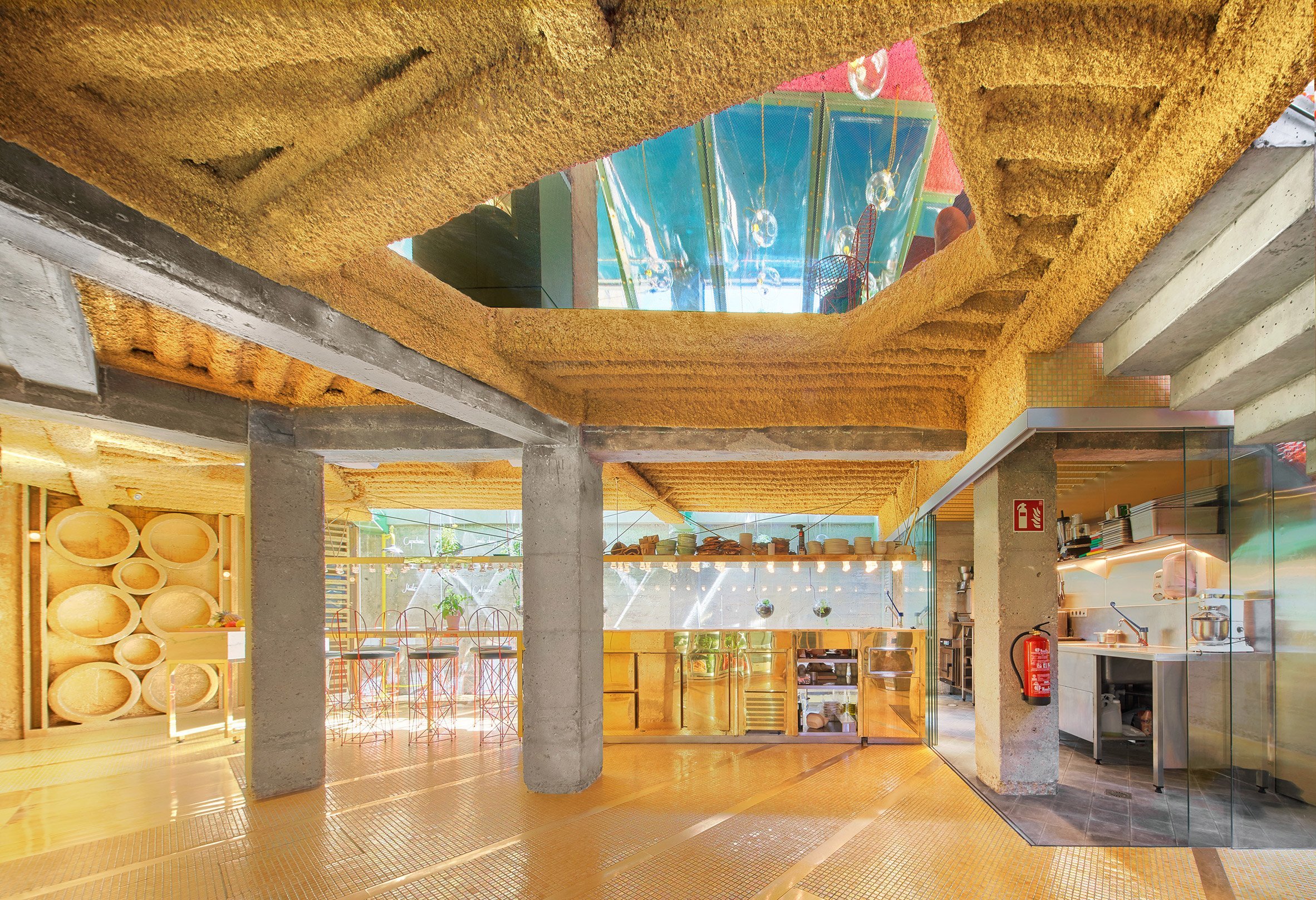 The practice has applied a vibrant mismatch of colours and materials inside on the ground floor, where the main cafe area lies.

Organic cellulose was used to create a grainy surface texture across the ceiling, which has been painted pink. Wood and pale, veiny marble have then been spliced together to form a patchwork floor.

Bright orange dining tables have been dotted throughout. Some of them back onto bubblegum-pink seating booths with scalloped edges, while others are surrounded by bespoke chairs that the practice designed itself.

One model has a vermillion-red metal frame, with a criss-cross base and meshed circular backrest.

The other style of chair has a more blocky form and is composed of sea-green bricks made from wax and pine tree resin.

“[The chairs] look like quite stable architectural elements, as a way to underscore the mutability and lightness of the rest of the elements in Run Run Run’s architecture”.

The practice’s bold palette continues down on the lower-ground floor. Here there’s a casual meeting area anchored by a long brass and marble table, illuminated by an exposed-bulb lamp that dangles above.

Behind are the showers, only separated by a pane of glass. If users dare to get bare, they can leave their belongings in the round silver-metal lockers that extend from the wall.

Andrés Jaque/Office for Political Innovation was established in 2003. Founding architect Andrés Jaque has most recently collaborated with Ivan

The film, titled The Transscalar Architecture of COVID-19, reveals how the pandemic has affected everything from the economy and the built environment, to pollution levels and wildlife habitats.

Photography is by José Hevia unless stated otherwise.