A subway car-style corridor, worn concrete walls and metal railings feature inside this Shanghai’s shop like the New York subway, which Sò Studio has designed.

Canal St offers a selection of high-end streetwear and was designed by locally-based Sò Studio. To “bring the downtown New York lifestyle to  Shanghai’s shop like the New York subway”.

The studio believes the two major cities have much in common, despite their disparate locations. 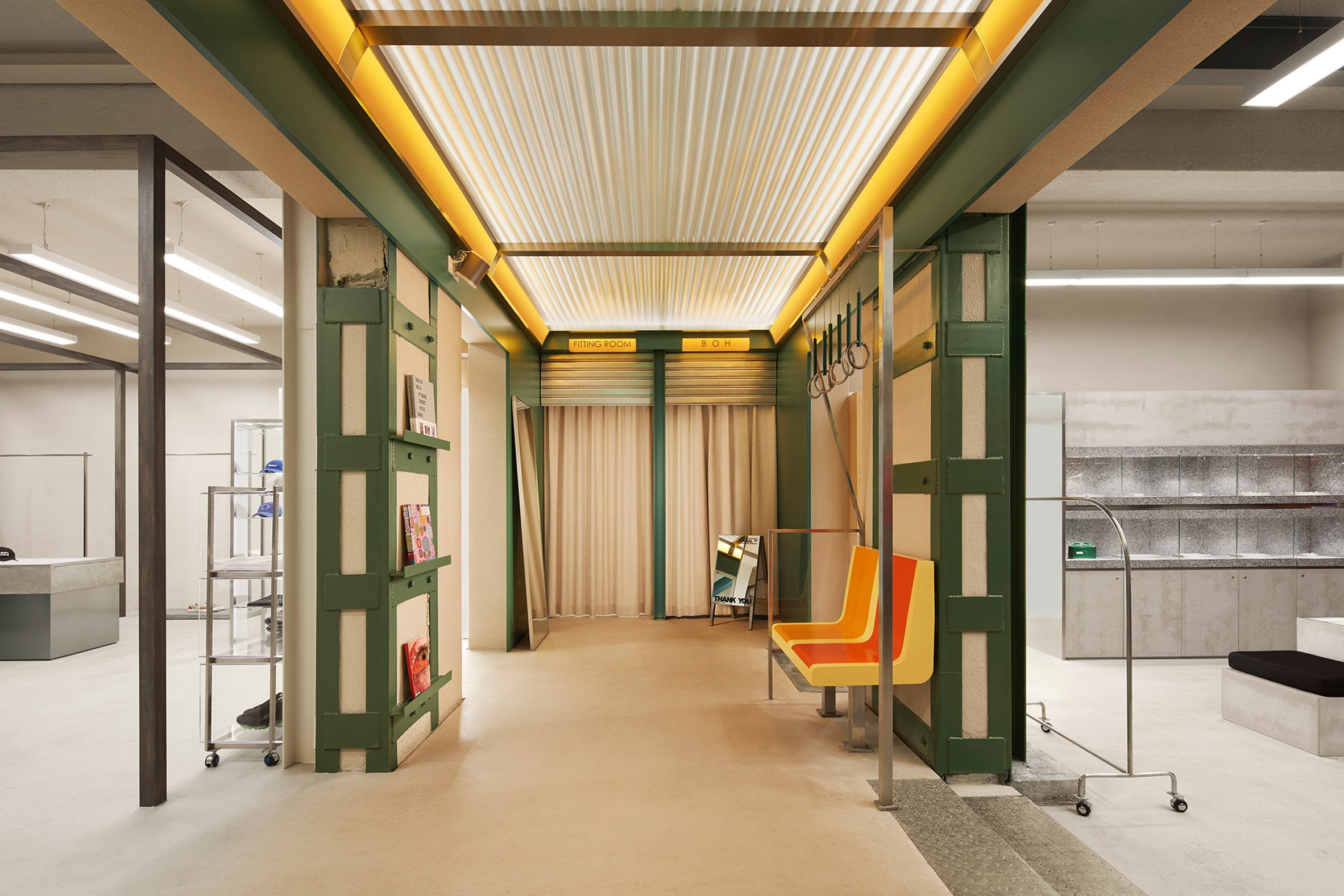 “In New York, you see the coexistence of elements made hundreds of years ago during the industrial age. Cutting-edge art, fashion, and pop culture,” said Sò Studio.

“Shanghai’s unique ethos is built upon Chinese traditional culture as well as nearly a century of concession”. Added the designers. “There is the constant tension that everything new here has also been polished and precipitated by time.”

The New York theme also suits the store’s name – Canal Street is a major road that runs from east to west of lower Manhattan.

A staircase was removed from the center of the store’s floor plan to create a short walkway that resembles a New York subway car.

Two plastic, orange-hued seats have been placed up against one wall. 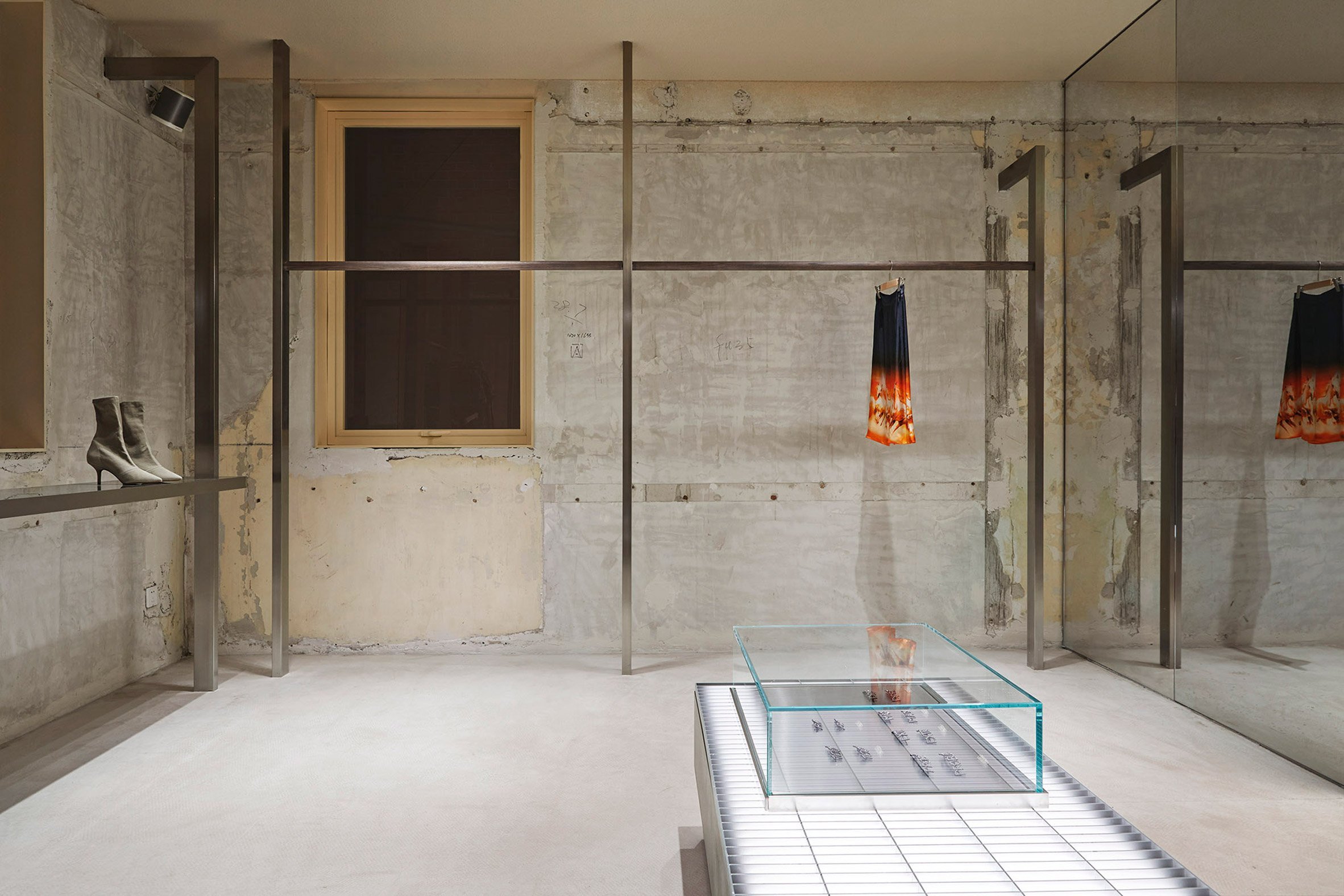 Overhead dangles a series of metal rings, mimicking the handles that standing subway passengers typically hold onto during journeys.

An illuminated yellow sign – akin to what would usually delineate the destination at the front of a train –. Has been used to point out the shop’s changing rooms. The doorways are partially covered by silver metal shutters. 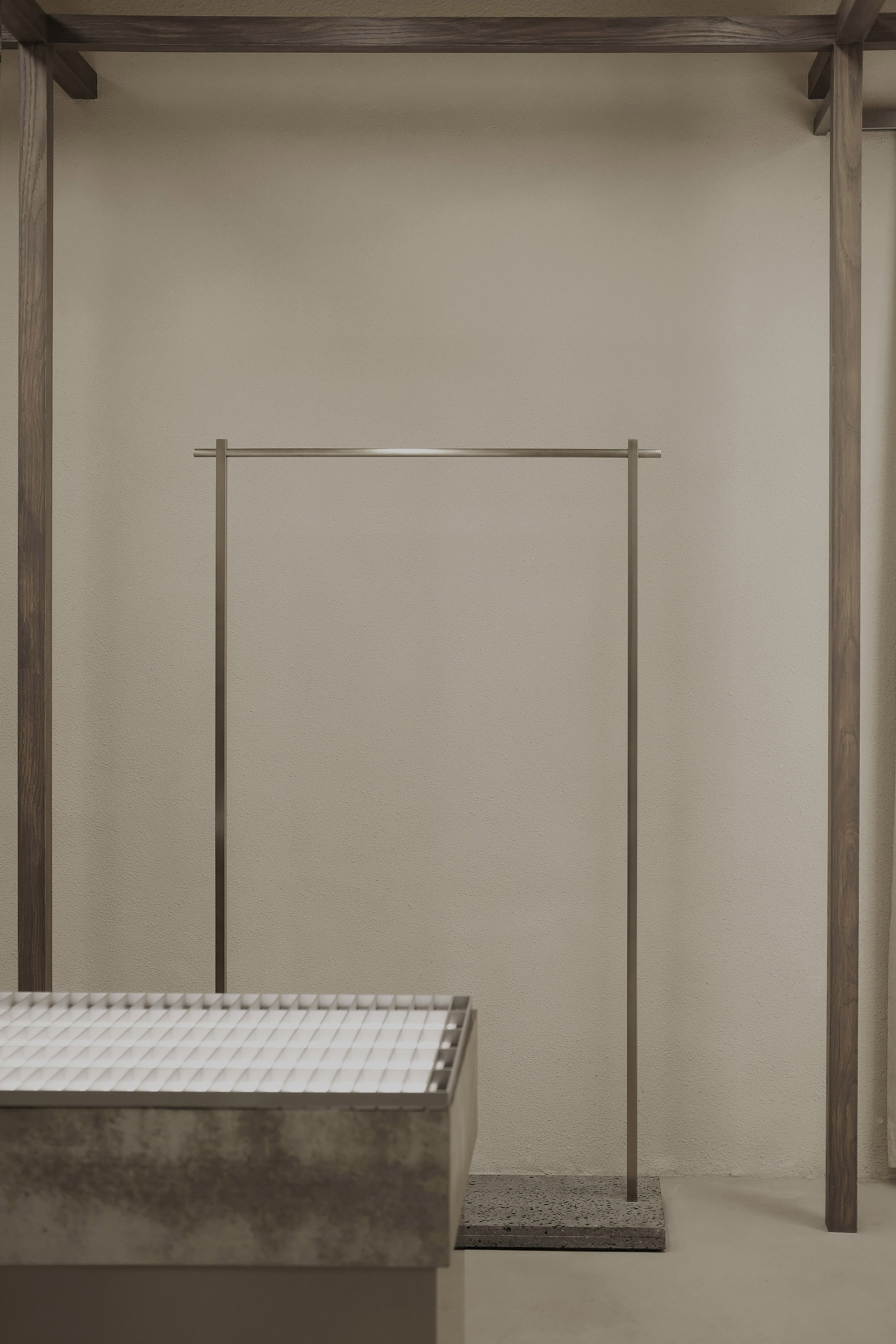 Other industrial touches throughout the two-floor store include steel clothes rails, exposed bolts in structural columns, and wire mesh partitions.

The illuminated countertops of several display plinths have also been covered with sheets of gridded metal to mimic a manhole. – covered openings dotted around New York that allow access to underground sewers. 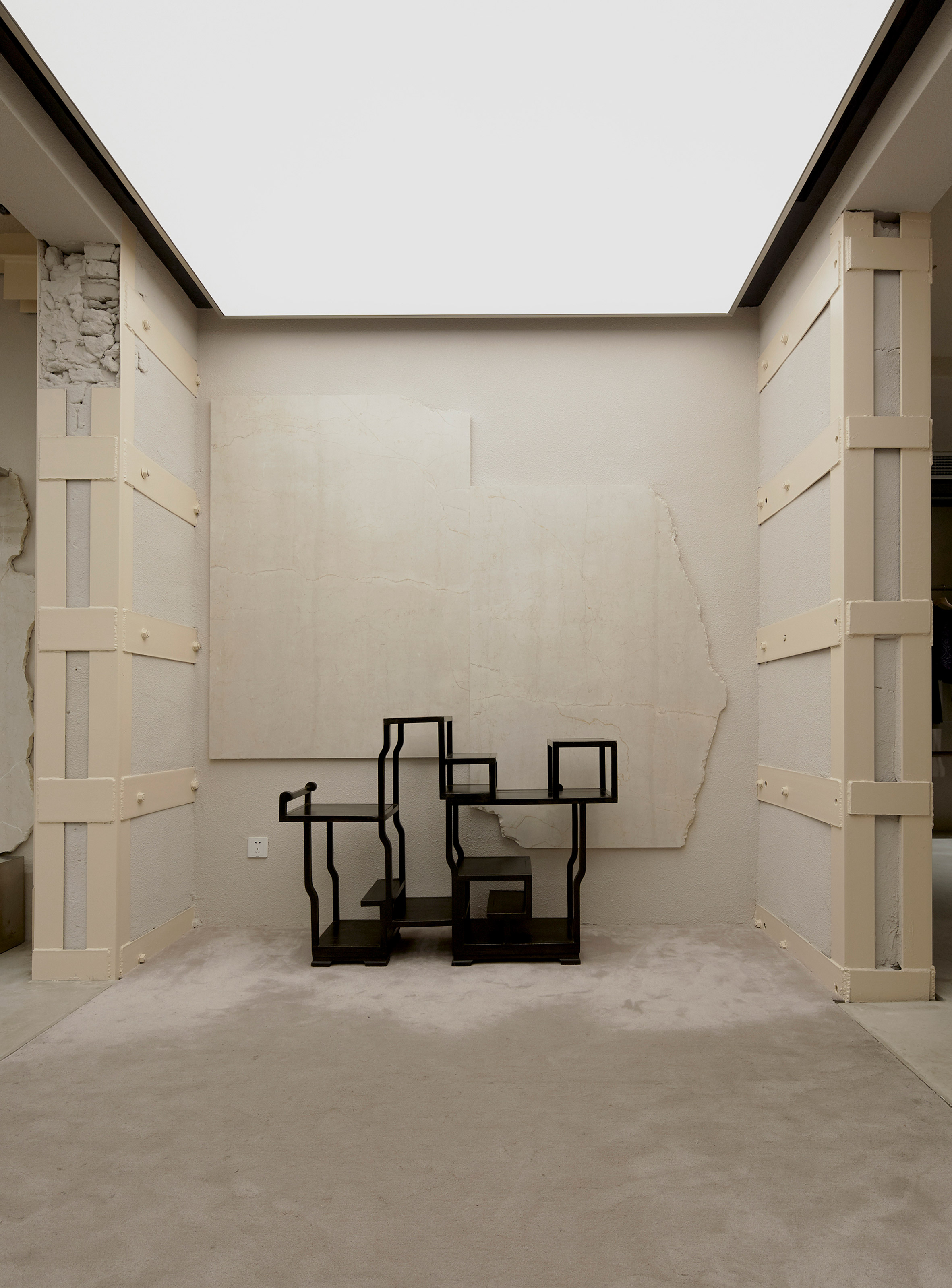 Surfaces throughout Canal St were initially meant to be freshened up with a coat of paint.

However, after completely stripping back the previous fit-out, the studio felt that existing dilapidated concrete walls better reflected New York’s dichotomy of old and new. 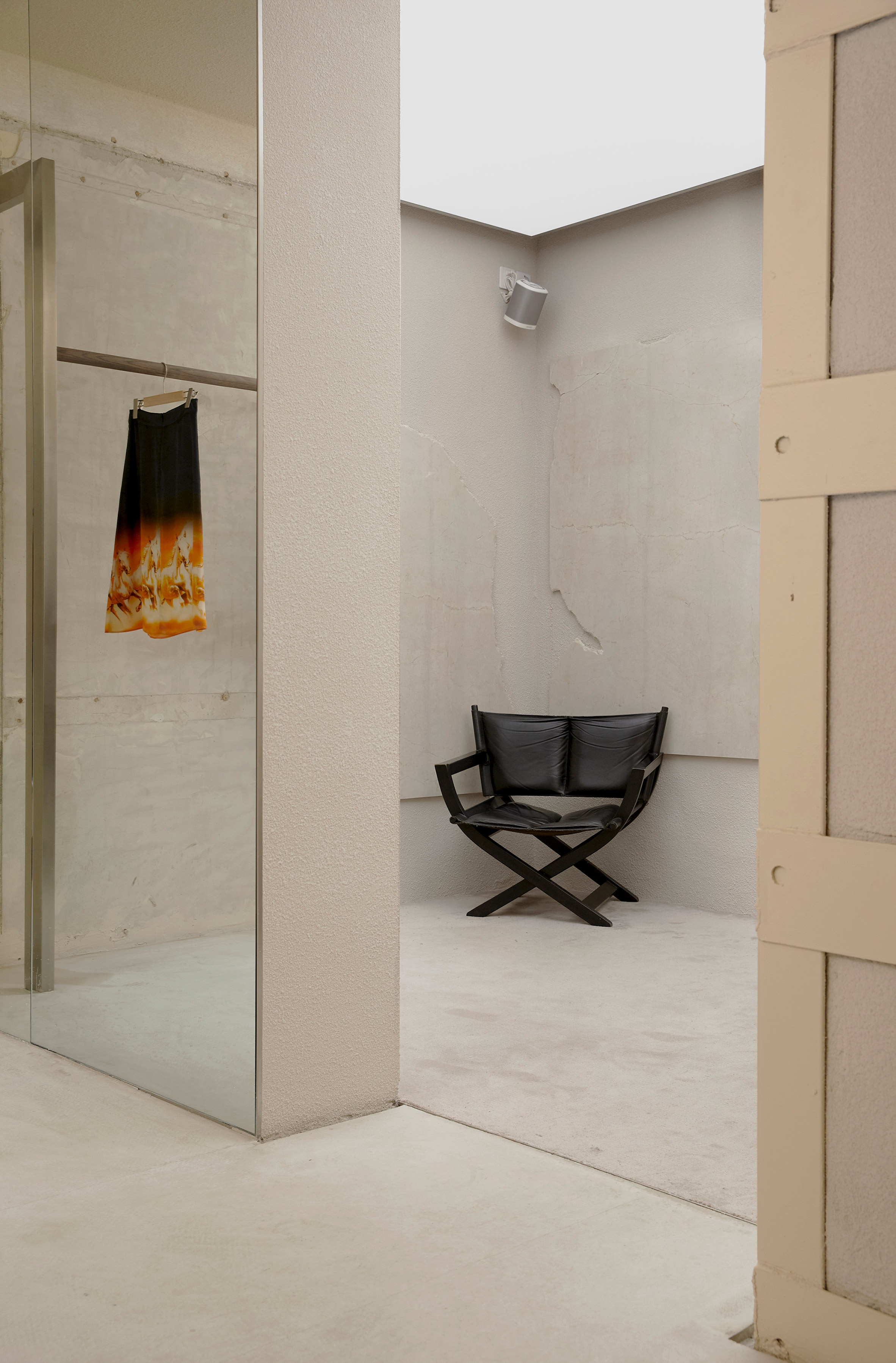 “We typically try hard to create a narrative in a space, but this building could tell it itself instead,” the studio explained.

“We surprisingly figured that a hybrid structure with the mark of time turned out to be like a good narrator who attempted to tell us stories in its own way,” it continued.

“We thus decided to reserve [the shop’s] original structure and walls. We believed that when these old marks met with a fresh design, it would produce a stimulating spatial experience.”

Splashes of color are provided by a green glass box that’s been erected beside the new staircase, and a couple of boxy green display stands that present products.

Sò Studio was established in 2016 by Jessica Wu and Mengjie Liu.

Its Canal St project joins a number of trendy boutiques in Shanghai – others include Assemble by Reél, which is designed to reflect an urban cityscape, and Neri&Hu’s Comme Moi, which boasts cage-like display cabinets.

1 thought on “Shanghai’s shop like the New York subway”