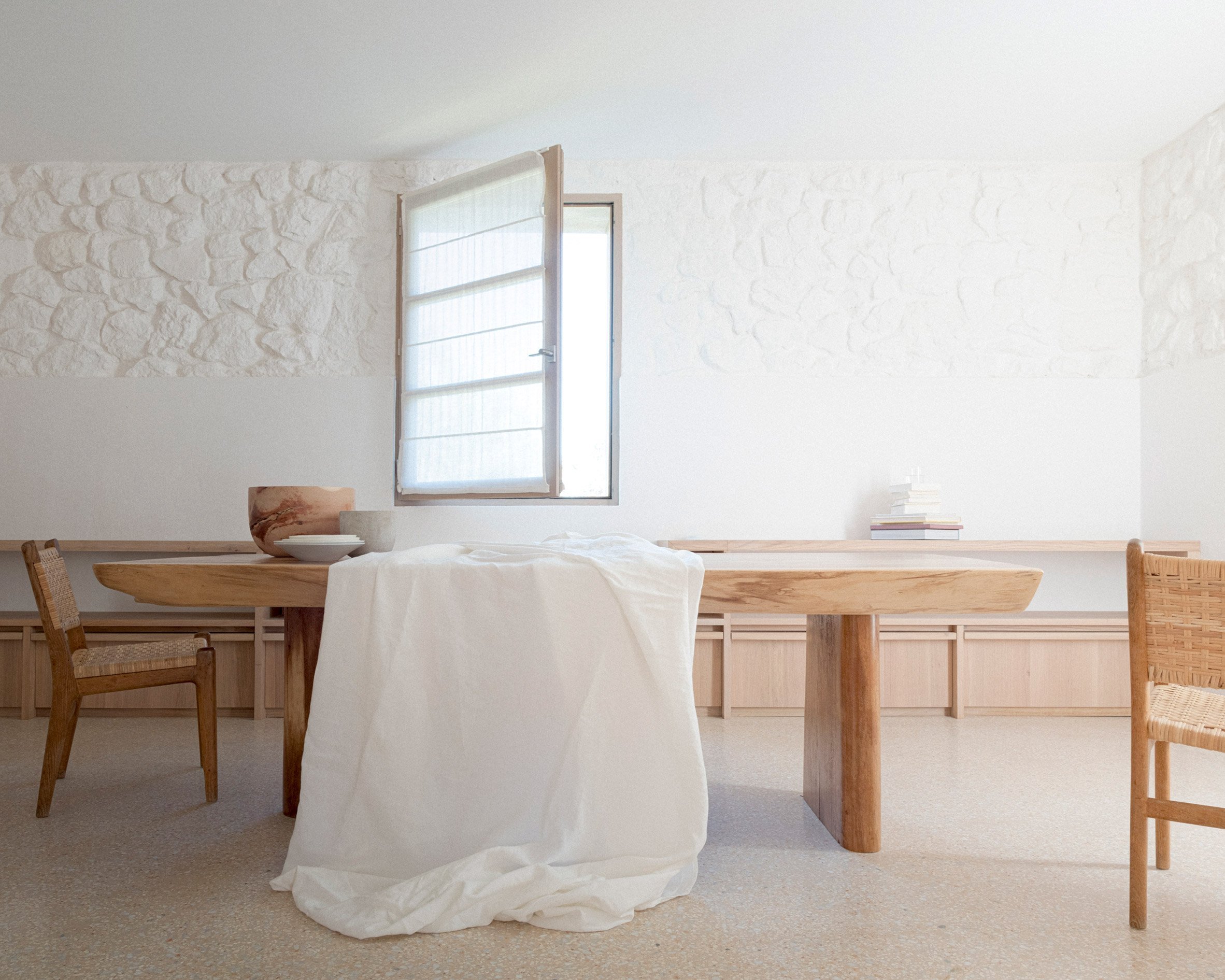 It takes over an old farmhouse on a plot of land that architect Timothee Mercier’s parents purchased back in 2001.

Mercier’s parents initially failed to obtain planning permission to turn the dilapidated structure into a home, so decided to build a property on a neighboring forested hillside.

The farm building sat deserted for a further 15 years before the local council agreed that a residential conversion could take place. The parents turned to Mercier to carry out the works. 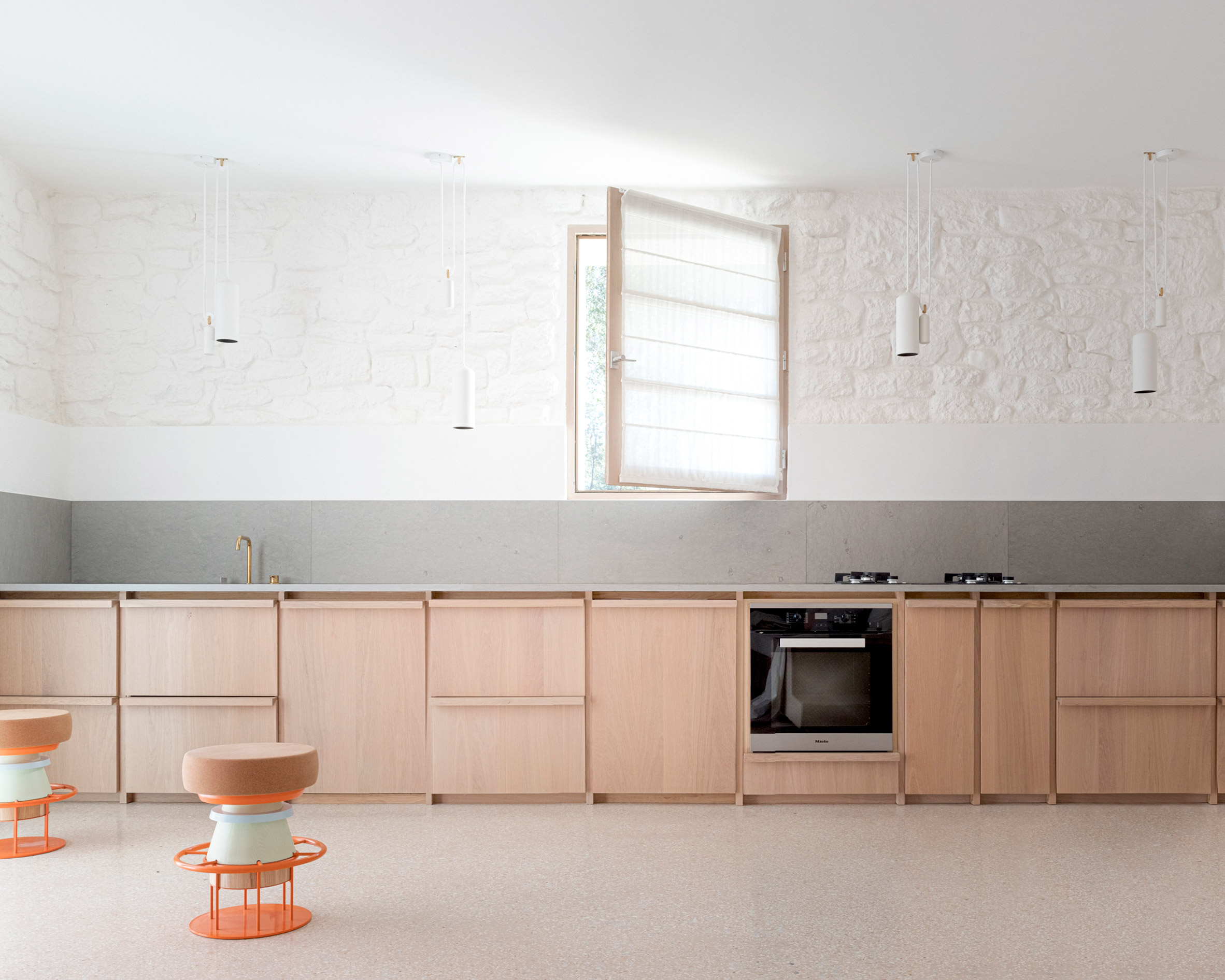 “More than a simple reconstruction, this house was imagined as a renewal,” explained Mercier, who leads his own architecture practice, Studio XM.

“Respectful of the aesthetic constraints and wishes of the clients the house was designed to be an intimate refuge buried in the hills – one that would respect the site and the architectural history of the region.”   INSTAGRAM 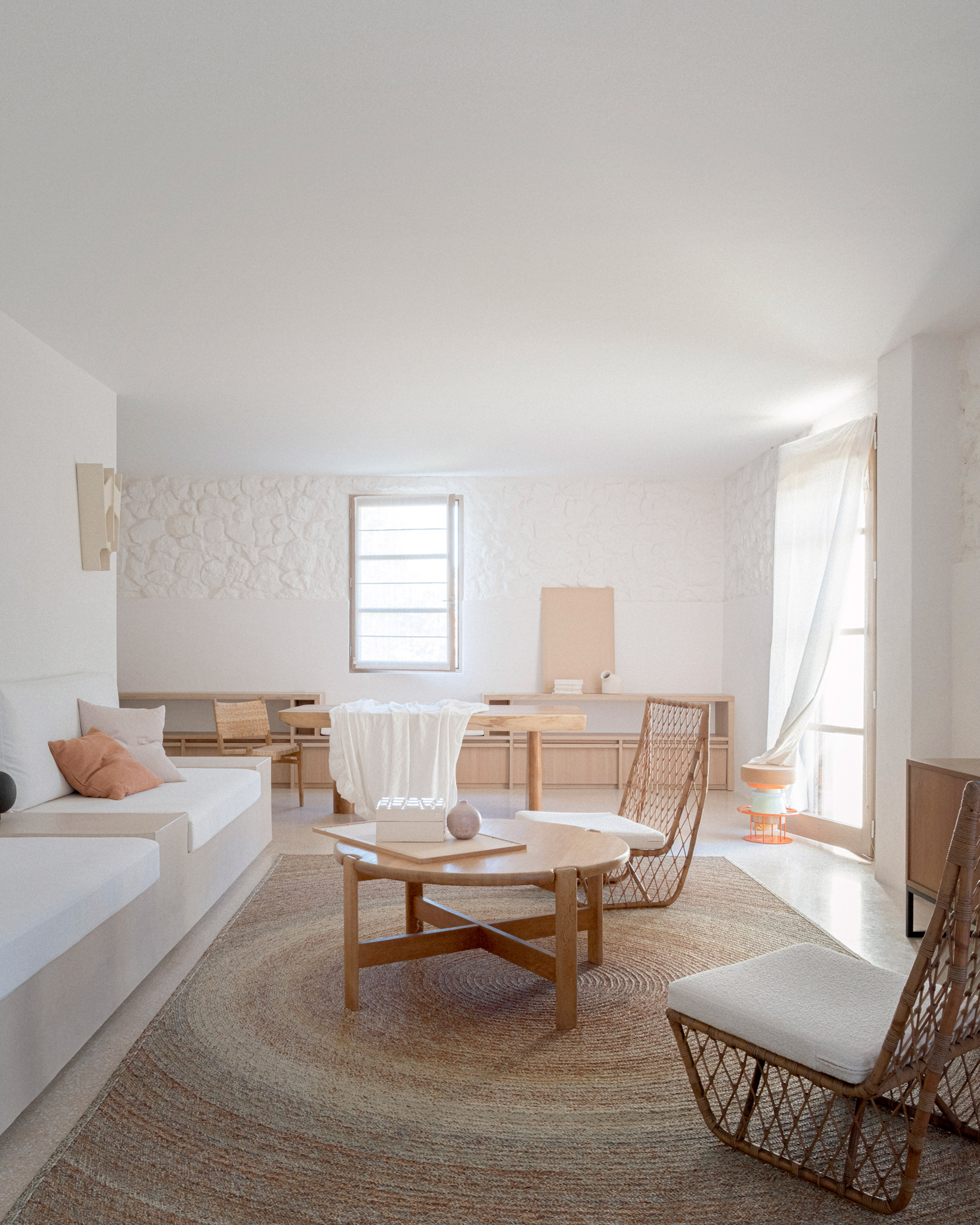 MA House sits over the footprint of the farm building and has largely been kept to the same proportions. Stones from the original structure have been used to form the home’s facade.

A mixture of green and red tiles, some of which are over 30 years old, has been applied across the roof.

Inside, there is an expansive open-plan living space that Mercier has deliberately finished in a pared-back aesthetic.

“I decided early-on to infuse the house with the monastic qualities of its surroundings”. “It had to be a spectacle, but a discrete one.”

“The project tried to stay clear of fuss and clutter – flexible and open to people’s interpretation of intimacy,” he continued. 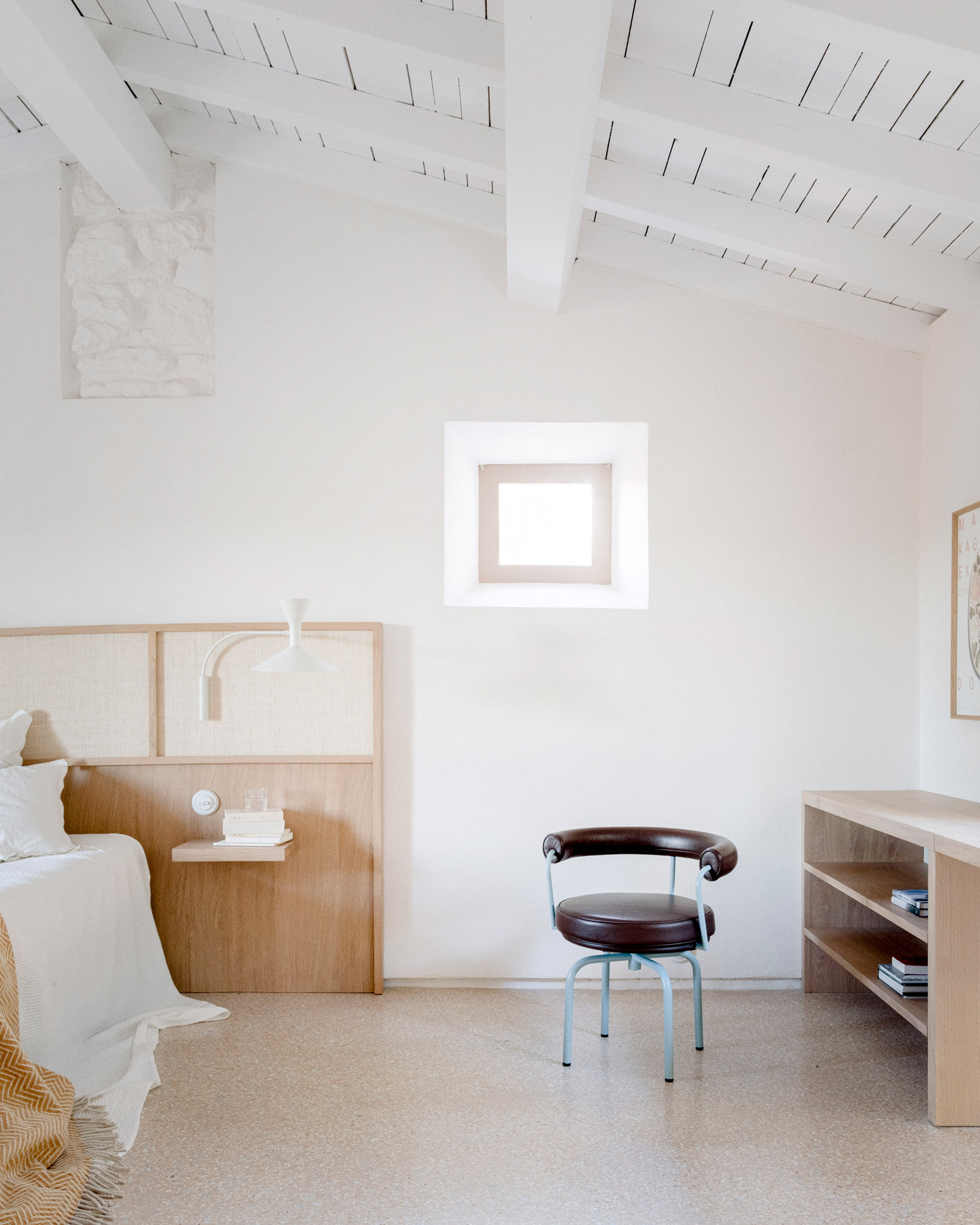 On one side of the living space is a dining room that’s centered by a chunky timber table. The other side accommodates the kitchen, which has been finished with low-lying oakwood cabinetry.

The countertop has been crafted from grey-blue limestone and plain white pendant lamps dangle from the ceiling.

A splash of color is provided by a couple of bright-orange Tembo stools. 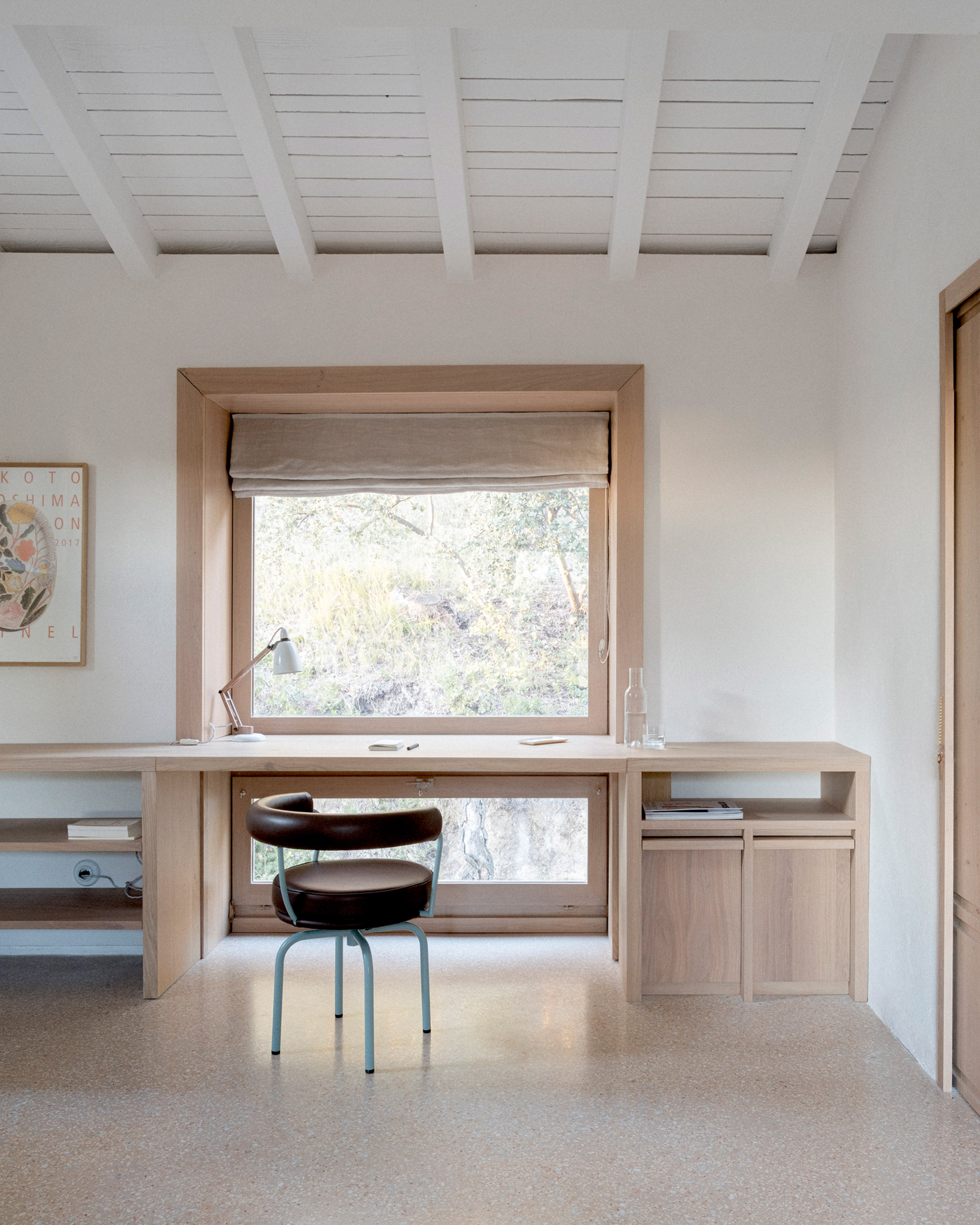 At the center of the living space is a lounge. Across the floor, there’s a rug from French brand Codimat, woven to feature concentric rust-colored circles.

Perched on top are a pair of cane armchairs and a wooden coffee table that was found in a Parisian flea market.

A blocky stone plinth has also been inset with white cushions to form a sofa. The plinth then dog-legs around a wall to form the first tread of the home’s staircase. 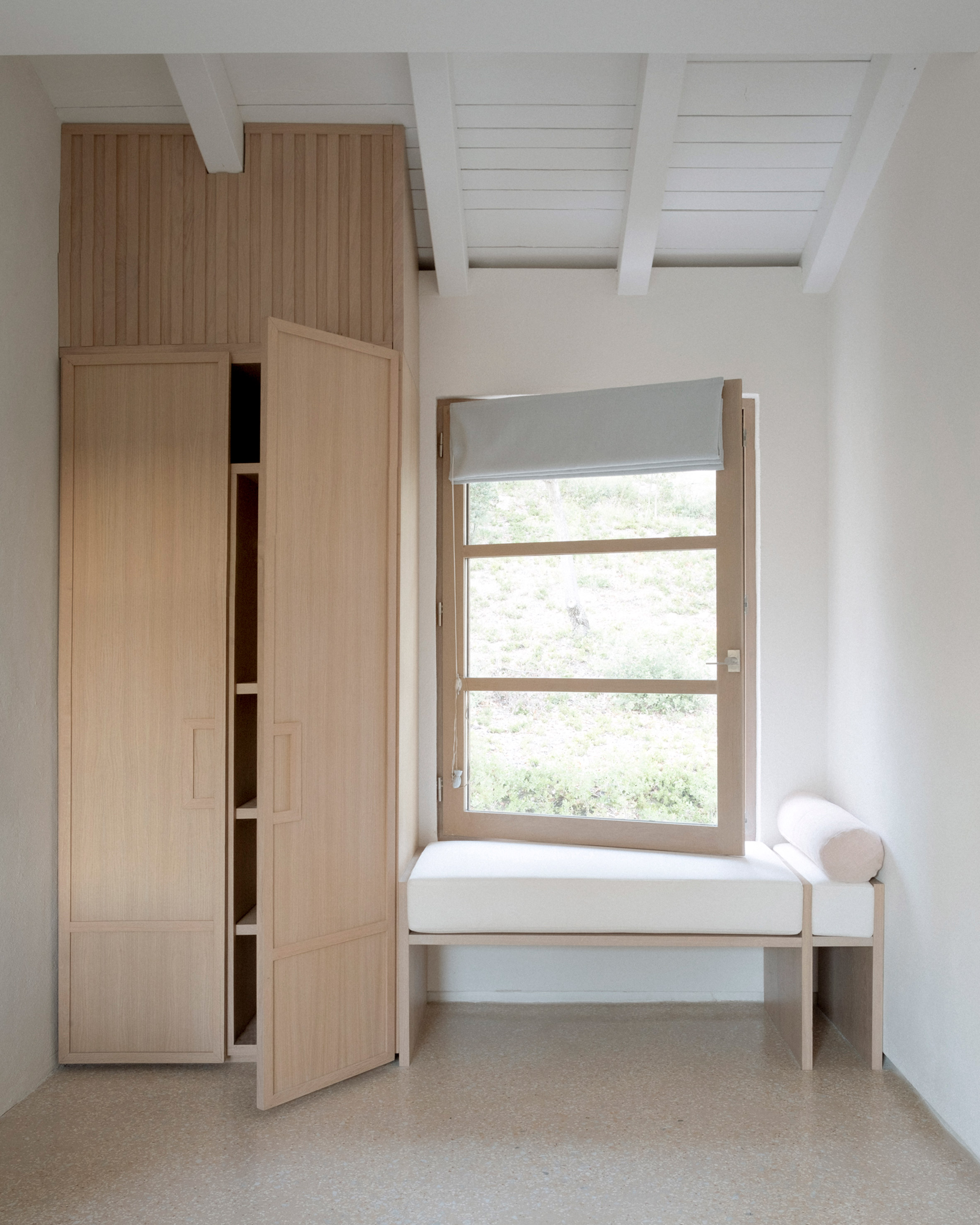 The light-hued material palette of the ground floor continues upstairs. Mercier used oak wood and raffia – a type of palm tree – to create a headboard for the master bedroom.

Oak has then been used to make the room’s desk, which sits directly behind a large picture window. It’s accompanied by a curved, aubergine-colored chair from Cassina.

One room also has a floor-to-ceiling oak storage unit, placed beside a white daybed.

In the bathroom, the custom-made tub is crafted from Hinoki cypress – a type of wood that’s native to Japan. A tall pane of glass has also been erected to separate the shower from the rest of the space.

Sections of the home’s stone exterior have been left exposed inside the home to form textured surfaces that have then been white-washed with Chaux – a local lime plaster. 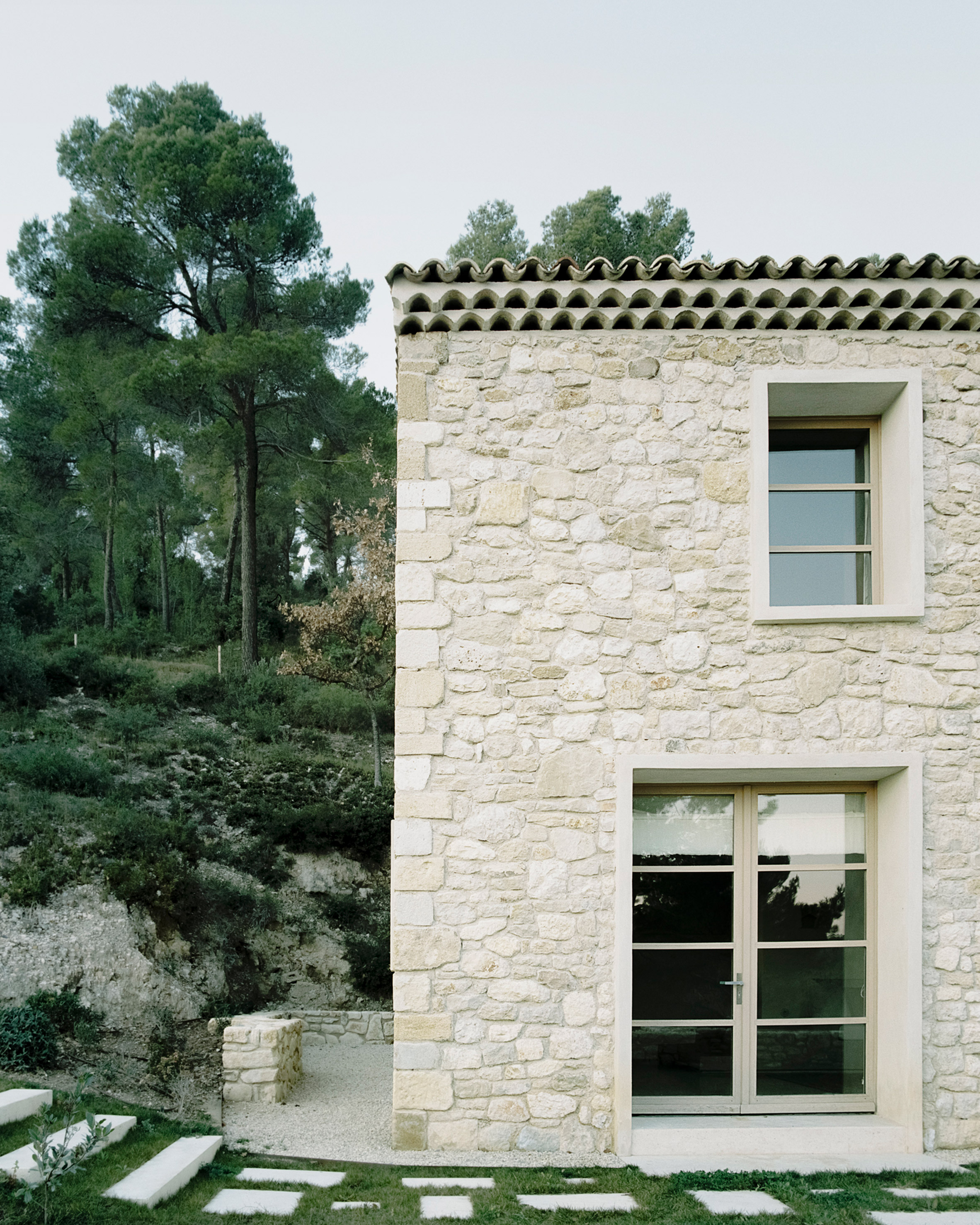 Timothee Mercier isn’t the only architect that has designed a house for his mum and dad. Back in 2017, Michael Viviano created a contemporary gabled house in Houston, Texas for his parents.

Photography is by Simone Bossi.