The first thing one might notice about the Aluminium House | Fran Silvestre Arquitectos and other projects of Fran Silvestre and his studio of architects in Spain is their particular atmosphere.

of extravagantly understated elegance and luxury of Aluminium House | Fran Silvestre Arquitectos which is as recognizable in its own right as the work of, say, John Lautner or John Pawson. While this first impression may seem rather superficial, it points us towards a difficult-to-define quality in the works, what we might call an overall “geist” or “gestalt”, that runs very deep, and that is far more complex and interesting than a mere question of “style” or “branding”.

One approach to this depth and complexity begins with the evident tension in these works between formal and practical questions. Silvestre’s designs are
not simple solutions to given design problems, though he tends to present them as such. They absorb and distill the myriad issues of program, site and context, structure, building technologies, and so on, subsuming them into the play of space and form that could be understood as the true subject of his architecture.

The designs transform the particulars of each building into simple schemes of expansive spatial relations, using a formal vocabulary of abstract lines, planes, and, in certain cases, simple curves, in a rather Miesian idealization of Modernism. Silvestre’s works comprise a series of repetitions and variations on these spatial themes, which in their chronological development trace his growth as an architect, the expanding reach of his formal investigations, and the impact of adopting this formal repertoire to new problems and larger programs.

But at the same time, and as is to be expected, this formal play embodies the practical questions that it so vigorously dominates. The spaces that result may often seem generic, and apt for any possible function or purpose, but this is not the case. The space labeled on the plan as the “living area” assumes the spatial configuration and practical provisions this functional category requires. In the same sense, the garage is a garage, even if it’s the floor is paved in the same white marble tiles as the rest of the house, and its opening to the street is enclosed in the same sheer plane of floor-to-ceiling glass (as in the Hofmann House).

Thus, the distillation of the program, context and material process of building also meets a certain point of resistance that, in turn, conditions the formal play. In this sense, it would be difficult to define the perfect form of a given design in a Platonic sense. Any hypothetical movement towards such an idealization finds its limits in these conditioning circumstances, which in practice profoundly determine the actual design.

For example, the deep roof overhangs and projecting walls that often frame the continuous walls of glass, like a bookcase, serve mainly to control the penetration of sunlight through different seasons. We could thus argue that they represent an adaption of the generic Miesian pavilion, as in the Farnsworth House, to a Mediterranean setting. These enclosing planes generally have a considerable thickness, which conveys an implicit association with the typical masonry construction of the Mediterranean, rather than the lighter, framed structures of northern Europe which were the implicit point of reference for the Miesian pavilion. Thus, seemingly abstract features harbor important cultural and contextual cues.

The greatest point of practical resistance to the will-to-form of Silvestre’s designs is found in the question of their supporting structures. Silvestre
pushes against the limits of normal structural practice in his effort to achieve seemingly impossible spans of unsupported and uninterrupted spatial enclosure. This singular battle against gravity, and in search of weightlessness, is I think
the factor that contributes most to the particular character of his work, its atmosphere of extravagant but understated luxury, which is based not so much on fine finishes and materials, but rather on expansive ease of spatial extension achieved through a great but largely invisible effort.

The standard Miesian and Corbusian formula would have offered him a simple structural solution for his open plans: the structure is expressed in a grid of columns independent of the non-structural vertical planes. But Silvestre rejects the march of columns, window mullions, and other repetitive elements that
would break up the free flow of space into rhythmic intervals. Thus, the work of structural support in his designs is integrated into the walls, as we have noted, as well as hidden inside partitions and cabinetry. And as a result, his efforts to represent these vertical elements as apparently free and de-materialized planes always requires a degree of sleigh-of-hand and structural daring, a game he evidently relishes.

For example, the roof of the Hofmann House is supported exclusively by four steel columns hidden in the interior core of bedrooms and service spaces, allowing the window wall to be completely uninterrupted on three sides, and leaving enormous cantilevers on either end, which span the open spaces of the living area and studio. Furthermore, the massive wall at the back of the house, which towers over the roof to block views of a neighboring house, is lifted off the ground across its entire length so as to provide natural light to the core. This structural flourish frames the house, and the terrace in front of it, like a splendid peacock’s tail. The roof assembly is thus a massive, asymmetrical T in section, which provides a greater degree of stiffness for the large cantilevers than the roof plane alone, although the support columns on the far side of the T must work as much in tension as in compression.

In other projects, such as the Balint House, Fran Silvestre uses the bedroom partitions of the upper floors as structural elements, together with the floor and ceiling, in a full-story Vierendeel truss, in order to achieve the free spans of uninterrupted space for the ground floor living area.

A consolidated landscape surrounded by gardens with big trees within the metropolis of Madrid is the fortunate starting point of this house.

The piece, of metallic and horizontal nature, produces the effect of having just one story. With its proportions and materiality, it both contrasts and blends with the tall trees of its environment. 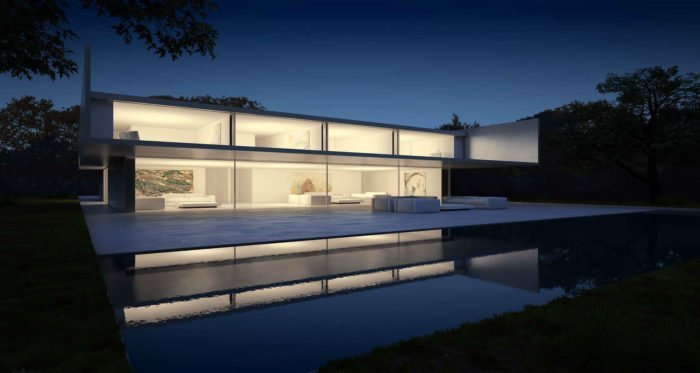 The scale of the house is moderated through the understanding of the day area as a base emerging from the same natural stone which paves part of the plot. The night zone is placed on it and focuses the view to the north and south while protecting itself from the eyes of the neighbors and generating shaded terraces in which to enjoy the exterior.

The substantially square plan is designed to unite the program in a compact way. The staircase and central inner atrium distribute the rooms, establishing a functional hierarchy in which all spaces open up to the garden.